I met with Susan Kelly, the organizer of Generous Gardeners, to ask a few questions about the upcoming Tulip Festival. Susan’s group had a dozen volunteers busily planting pansies alongside the tulips to prepare for the event, and the beds were popping with color. 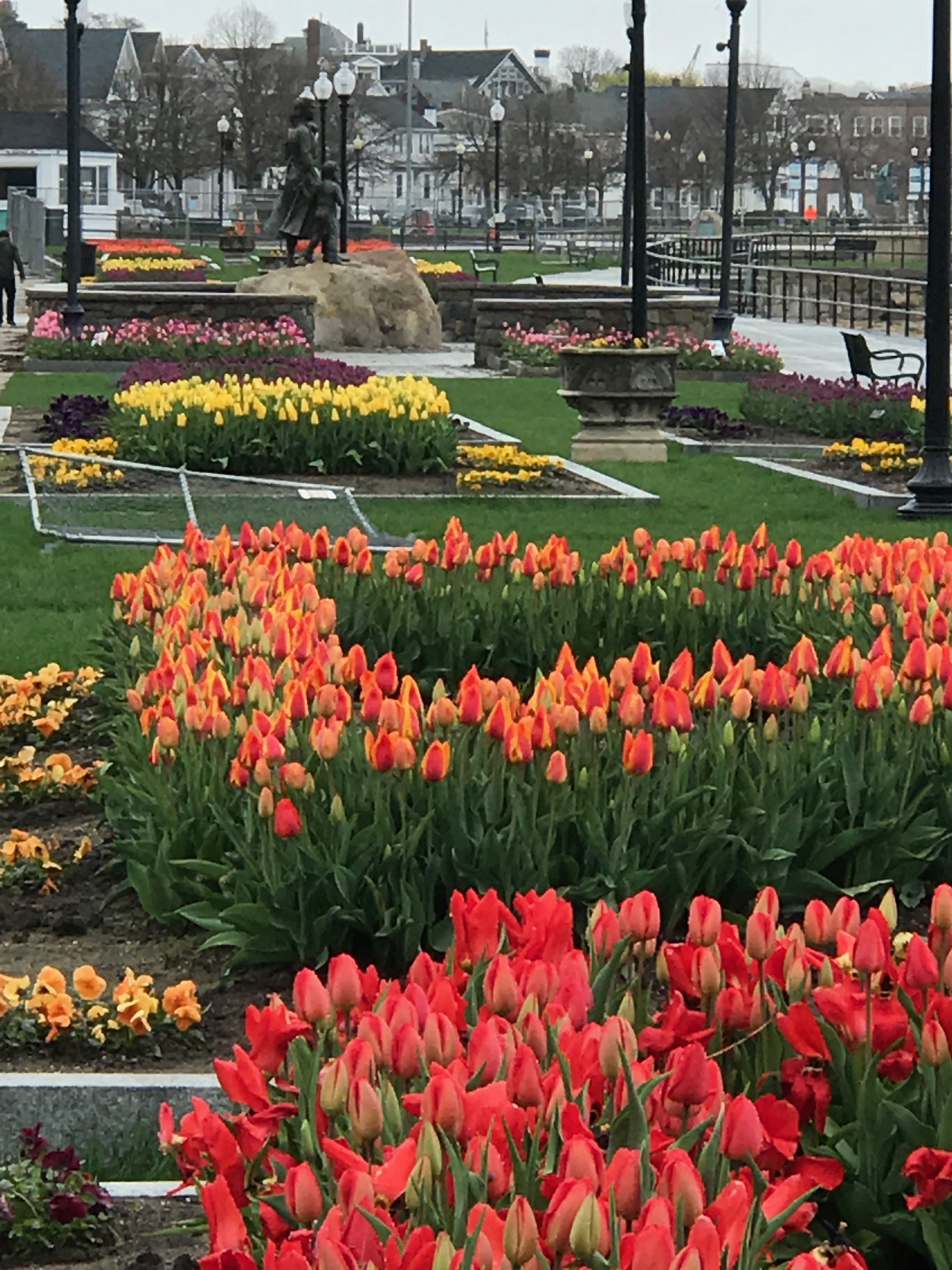 Susan explained that despite what some of us might think, the Tulip Festival isn’t an annual event - it’s the one and only event of its kind, and a special celebration to mark the re-opening of the boulevard. “If you miss this one, you’re out of luck - this is the only one,” she explained. 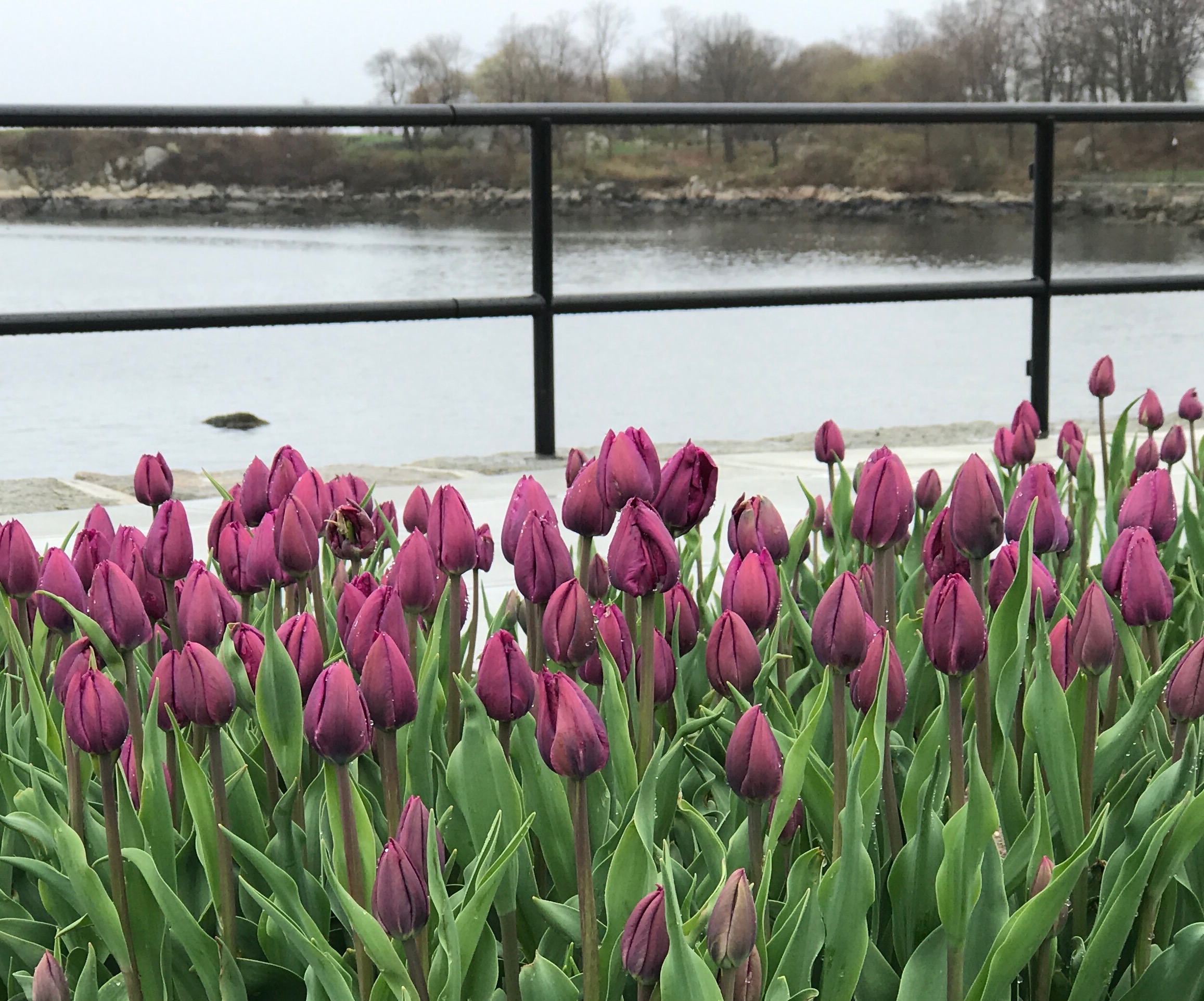 Why tulips? The planting endeavor began when the multi-million dollar seawall reconstruction project, which saw the western half of the promenade at Stacy Boulevard cordoned off for more than a year to repair and replace crumbling seawall, was reaching its final stages. The project’s managers approached the Generous Gardeners about designing beds for the new area. The idea was to break up the large expanses of cement, loam, and sod with something eye-pleasing - and the results are amazing!. 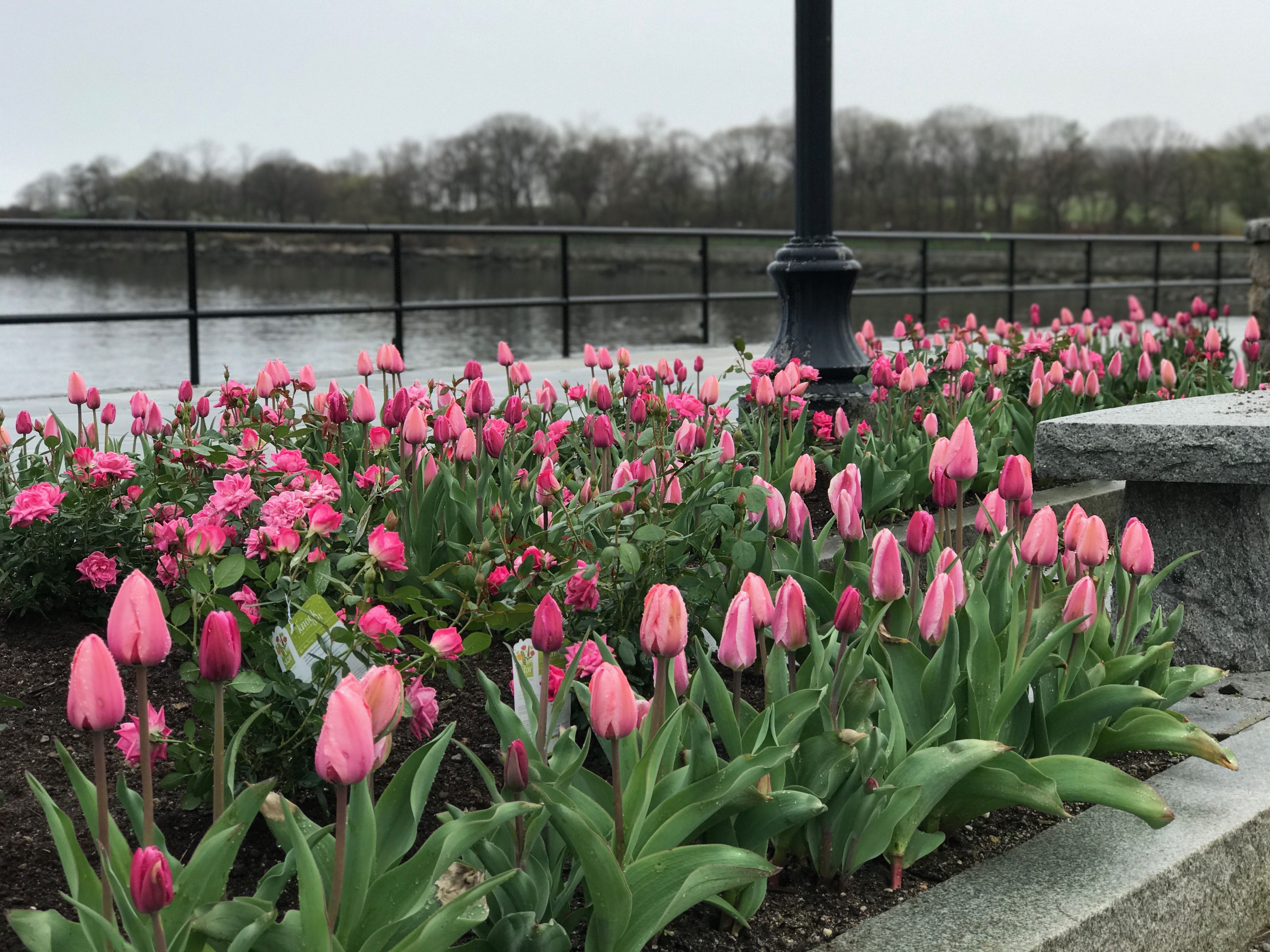 One of the members of the Generous Gardeners team is Ann Johnson, a landscape architect who previously designed the area around the Fishermen’s Wives statue. She set to work coming up with multiple designs for what the expansive garden bed area could look like. The winning design was chosen by both the Gloucester Fishermen’s Wives Association and the mayor’s office. While the seawall project provided the funds for the irrigation, granite for the beds, and loam, the Generous Gardeners team has raised funds privately to pay for the 22,000 tulips, as well as almost 7,000 daffodils and a myriad of pansies. Although the beds were installed in the fall, the group didn’t have time before winter to plant perennials, and the idea for the tulip festival was born! “These [areas of the boulevard] have been fenced off for a long time, and people are ready to get in here,” Kelly explained. 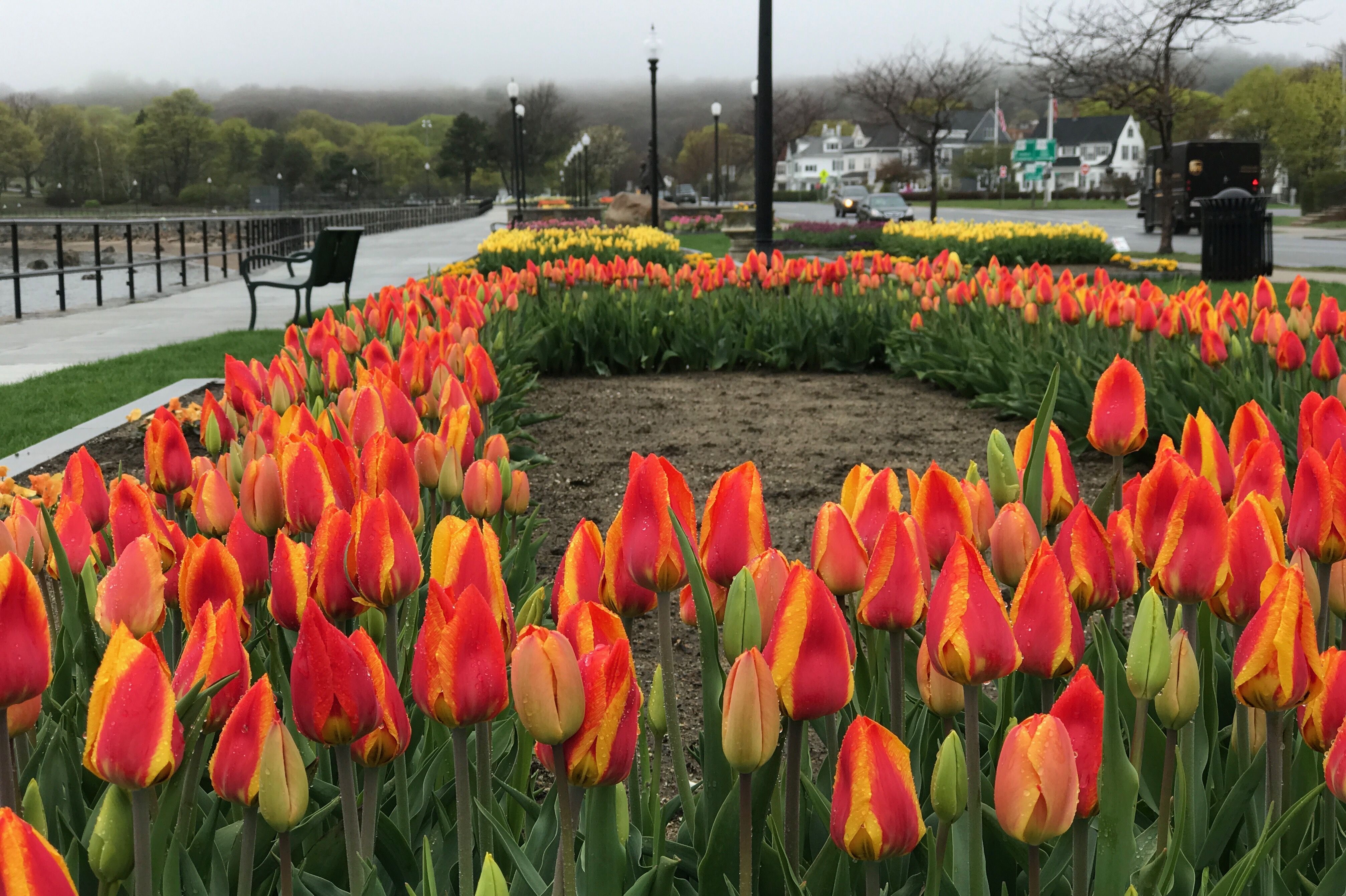 Each granite bed contains 1200 tulips arranged by color. Closest to the Fishermens’ Wives statue are pink tulips, then purple, yellow, orange and red heading away from the statue, mirrored on both sides.

The boulevard area is merely the latest labor of love the Generous Gardeners have taken on. The group started five years ago, when Kelly began a plant swapping site. While that idea didn’t take off, she was able to turn the initial idea into a group that instead practiced “philanthropy through gardening” - taking donations of plants by members and the community and keeping Gloucester beautiful. Many growers are able to divide the plants they’ve grown and end up with far too many - and hand those off to the Generous Gardeners who plant them around town. 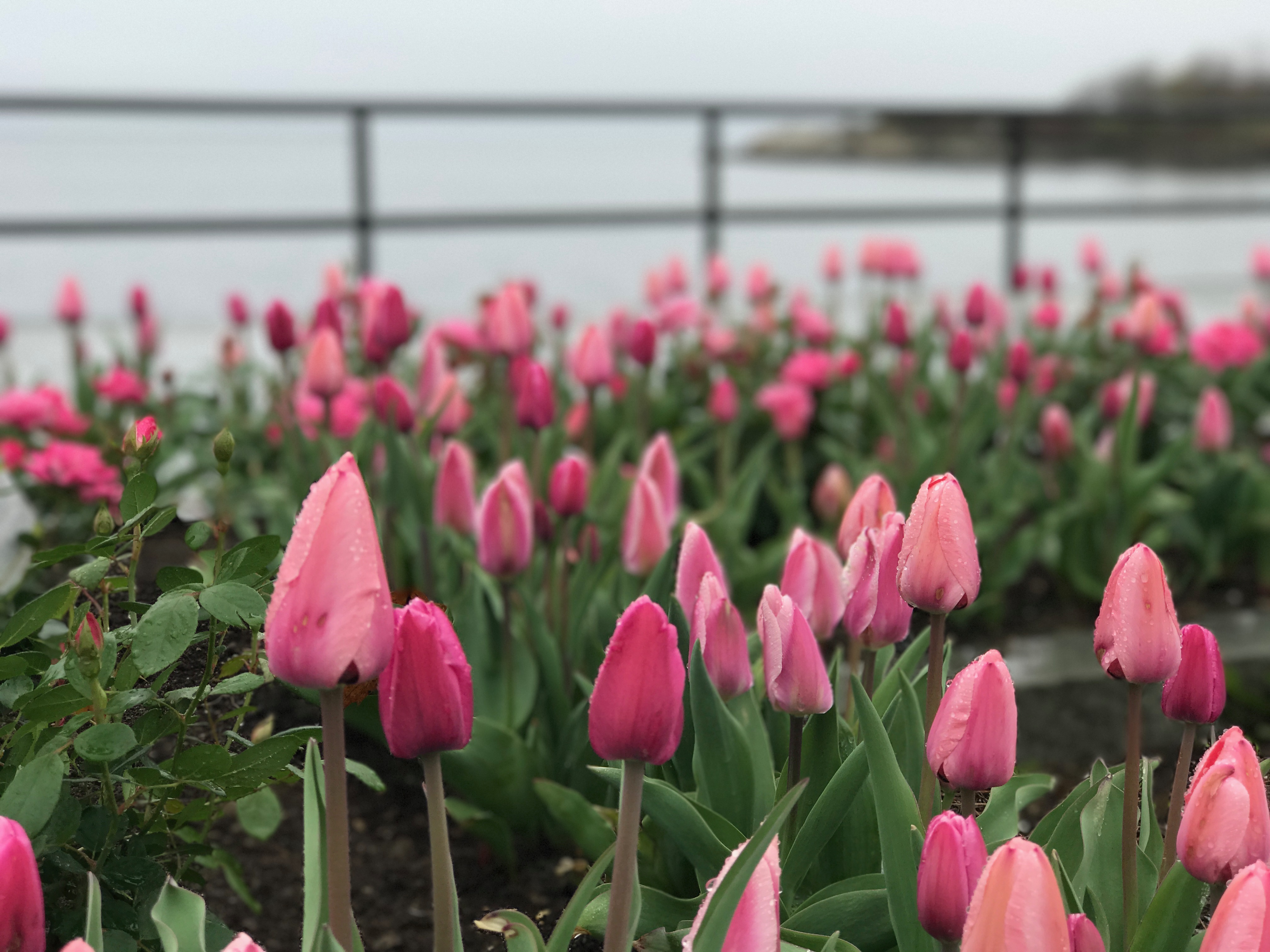 Kelly refers to herself as the “instigator” of the volunteer group. The Generous Gardeners maintain beds at Grant Circle, the Sawyer Free Library, and at the Gloucester Police Department, where the officers asked for rivers of blue and white daisies to be planted. They are now responsible for over 25 sites across Cape Ann, and for Kelly, gardening is life!  “Everything in my life is dirty!” she exclaims, wiping off her hands. “Dirty hands, clean heart.” The Tulip Festival itself is set to begin at 10 AM. The organizers suggest that participants “dress their best” - as the festival kicks off with an “old-fashioned promenade”, where finely dressed members of the public will stroll leisurely from the Stage Fort Park visitor’s center down to the Fishermen’s Wives Memorial. The event is free to join - or just watch. There will be prizes of baskets full of tulips - and gift certificates -  for the well-dressed, as well! According to their website, they will judge “based on elegance, creativity, and floral inspiration.” 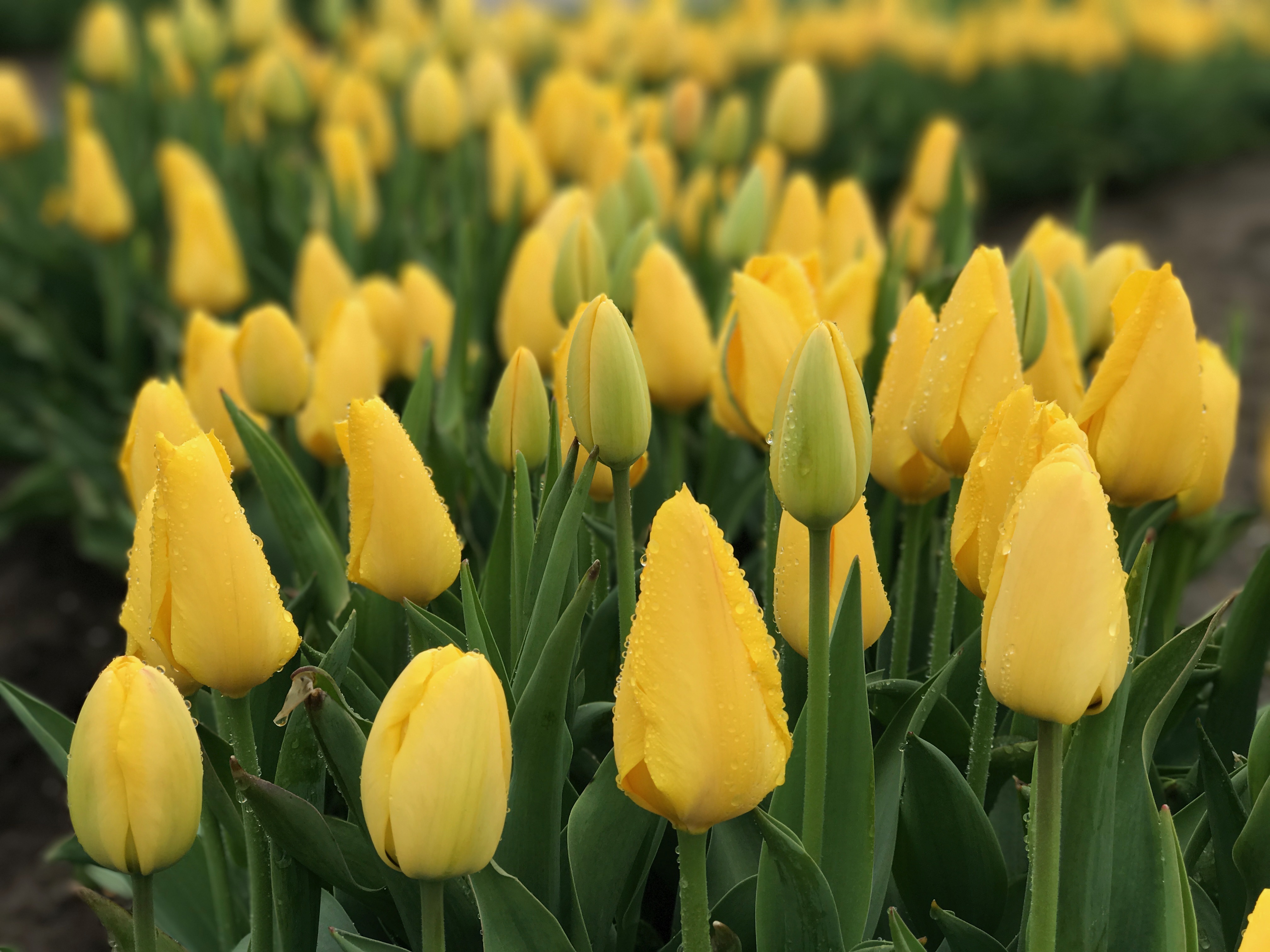 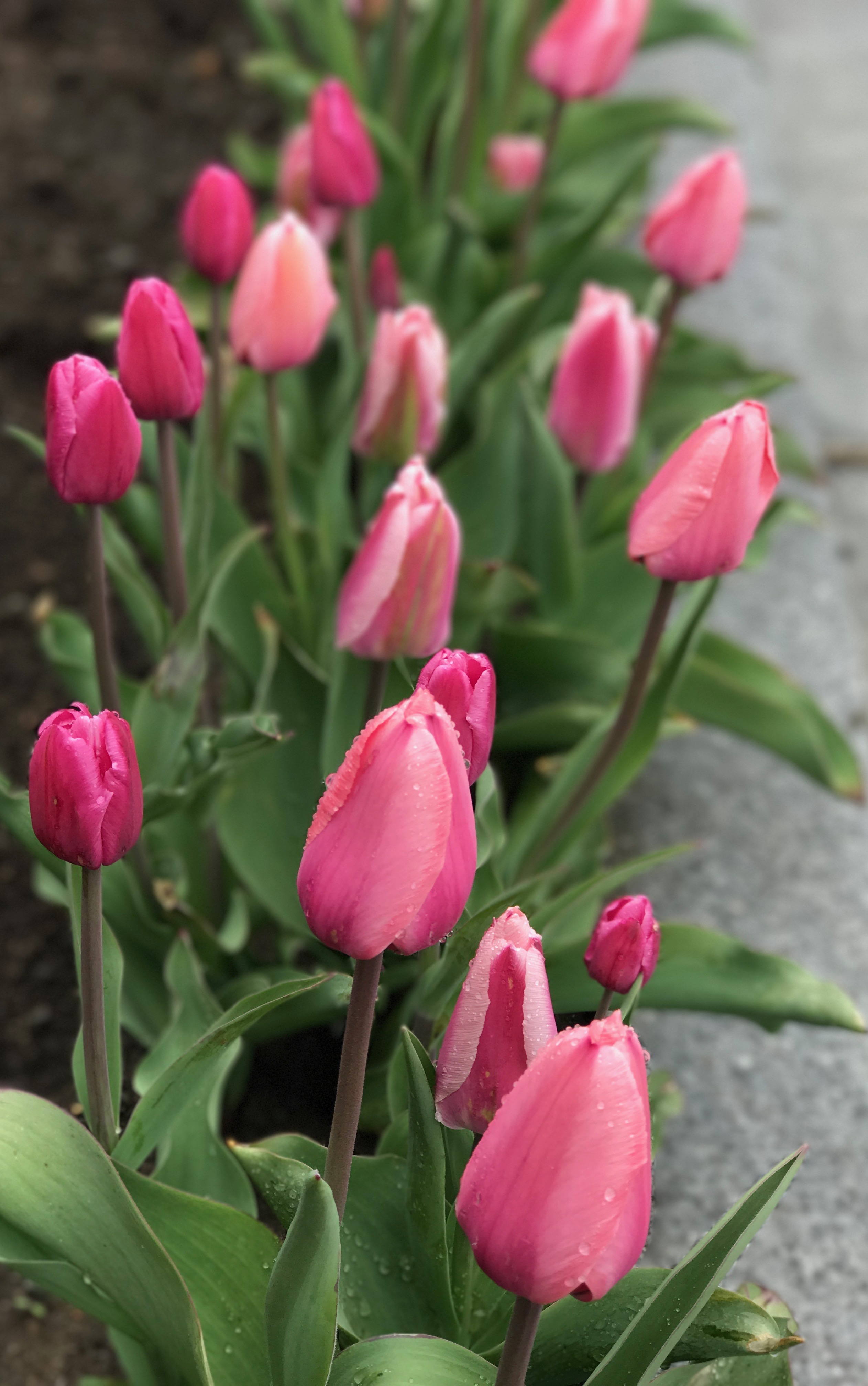 After the ribbon-cutting, volunteers from the Generous Gardeners will be on site throughout the afternoon, answering questions about the event and their cause, and giving us some great tulip trivia! 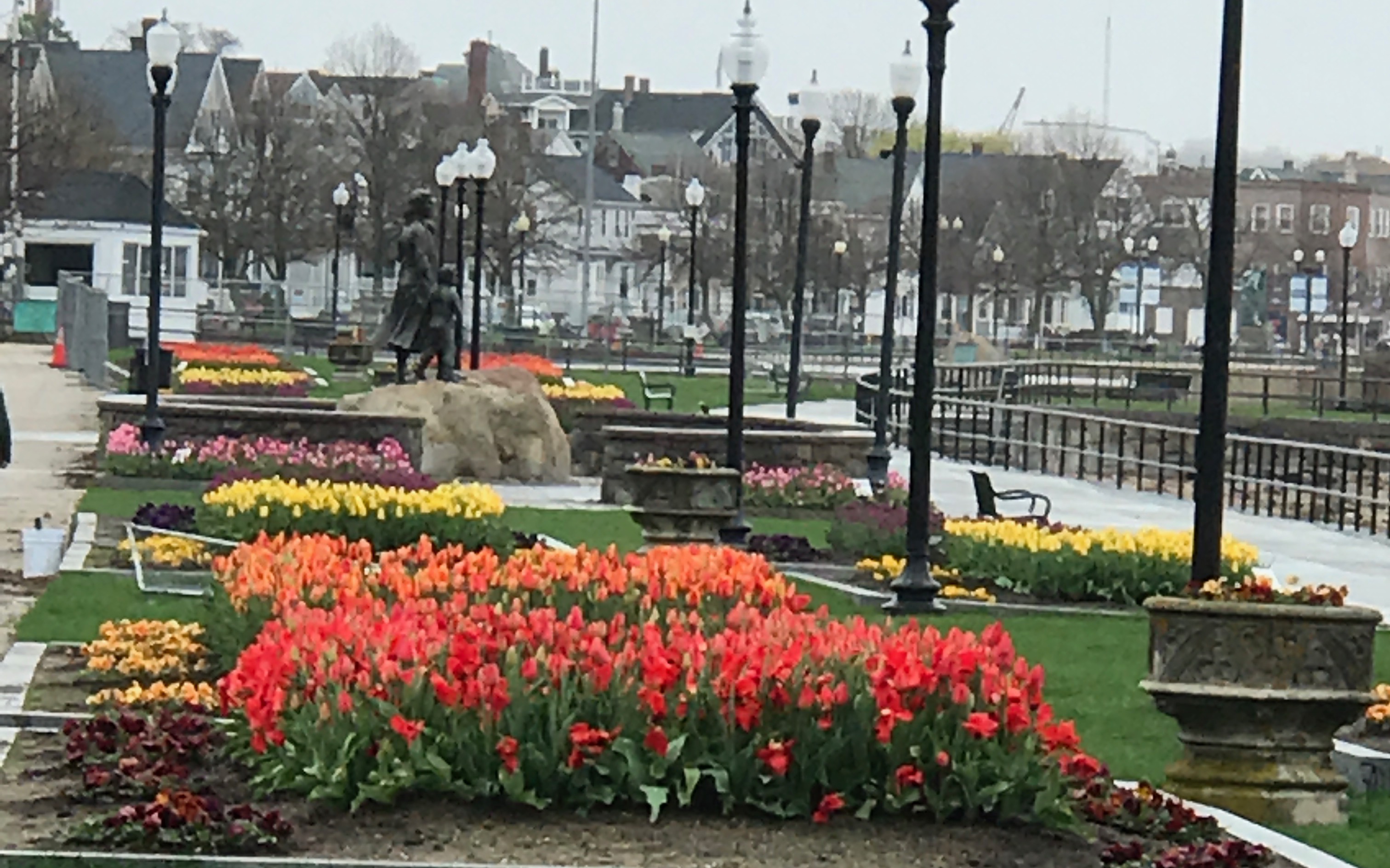 The Generous Gardeners are holding two upcoming events to raise money for the Tulip Festival and for the group’s flower budget in general. The first is a movie fundraiser taking place April 29 at Cape Ann Cinema and Stage. The featured picture is “Tulip Fever,” which takes place during the 1637 tulip craze in Holland, where one bulb could cost as much as a home. Doors are at 7, and the movie begins at 7:45. Tickets are $15 per person, and include served hors d'oeuvres. The second fundraiser to help out in raising funds for the Tulip Festival is a party at Mile Marker One (at Cape Ann’s Marina Resort) on the night of the festival, May 6. The party runs from 6-10PM, and for a $20 entry fee, includes appetizers and a live performance by the Honky Tonk Women of Gloucester. 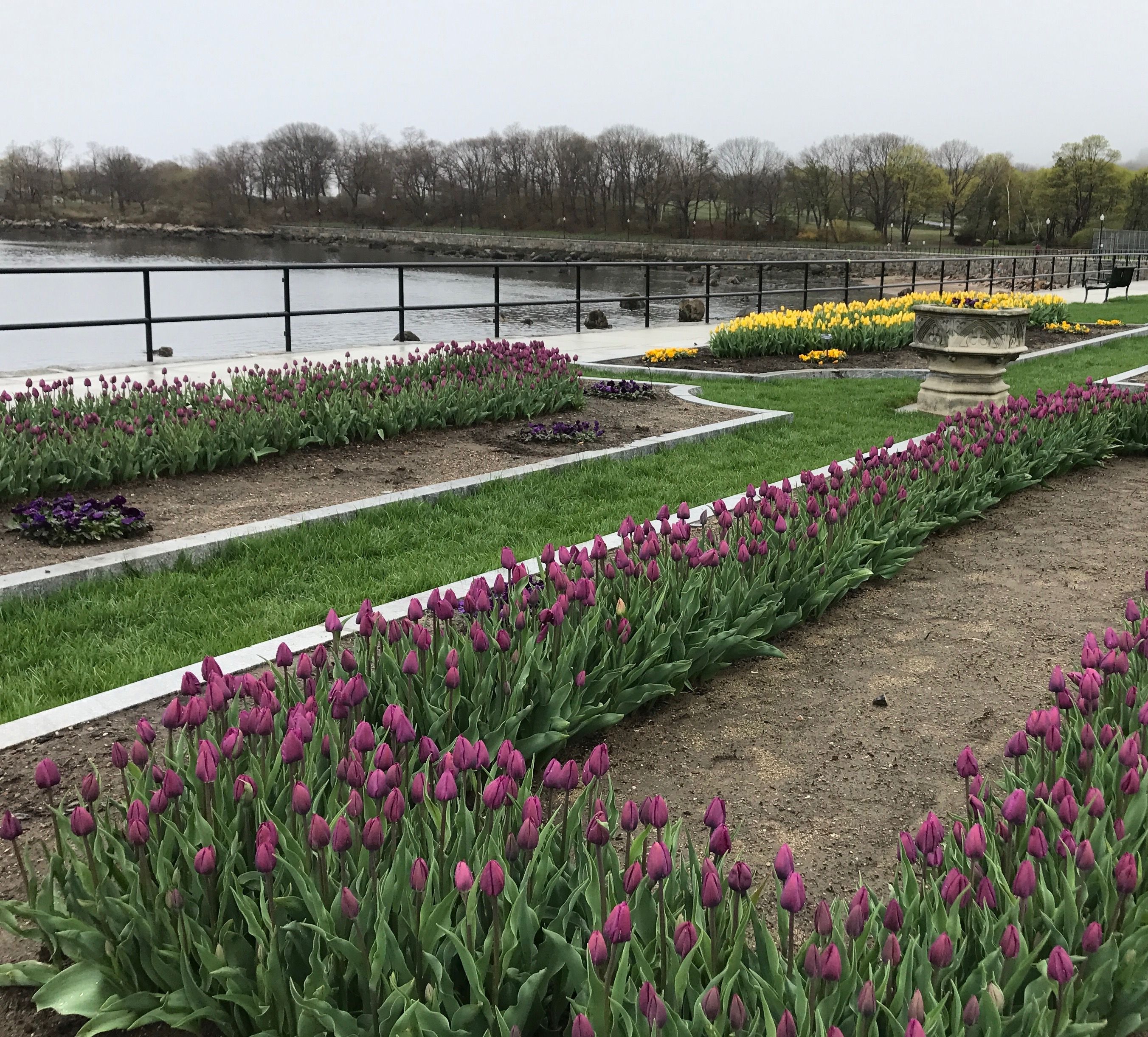 In addition to the two fundraisers, the group is also holding a raffle for a one of a kind Tulip River Cruise, taking place in April of 2018. The winners will receive a cruise package worth $8500, which includes round trip airfare for two, and food and wine for the entire cruise, which winds through Belgium and the Netherlands during the height of spring for 9 days. The group is only selling 200 tickets in total, so your chances of winning this amazing trip are pretty good! For more information on the raffle, click here.